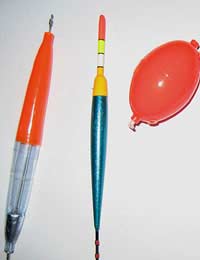 Knowing when you’ve got a bite is vital to a good fishing expedition – and over the years a range of indicating devices have been developed by commercial companies and ingenious anglers themselves to make that magic moment abundantly clear. Some of these indicators are as old as fishing itself, while others have a much more recent origin – but high-tech or simple, there’s nothing quite so guaranteed to set the pulse racing as a good, clear indication that the game is on!

Available in a bewildering array of shapes, sizes and colours, floats are the original bite indicators and have been the subject of ongoing development over the years. Today’s floats are the culmination of this attempt to match their design ever more precisely to the nature of the water they are used in, the technique being used and the prey that is being sought – from thin sticks and wire-stems to chunky pike floats. High visibility above-the-waterline helps the hopeful angler spot the bite, while the natural colouration below it stops the fish from perceiving the float as a threat.

As a general rule, those intended for still waters have a lower centre of gravity than those for river and stream use, since stability in a current is less important in lakes and ponds than the ability to resist wind and drifting. Ultimately a little advice and a lot of personal preference goes into the selection – get a few anglers together and you can be sure that a healthy debate will ensue over the relative merits of evocatively named floats such as wagglers, missiles and Avons!

Butt indicators are pivoting devices, set at the front rod rest, with an arm holding the head of the indicator on to the line, just in front of the reel. When the bait is taken, the tug of the line pulls the arm out of the retaining head, its movement clearly showing that there is a fish to be played. There are many competing versions available, some of which incorporate electronic alarms or lights to back up the point, should the angler be proving a bit dozy!

While butt indicators are a relatively new development, bobbins are another traditional approach to spotting a bite. Originally a ball of dough used for ledgering, hanging below the line between the reel and the rod’s first ring, the name has become extended to any kind of freely hung bite indicator – and the angler now has many to chose between. The basic idea is incredibly simple; as the line tightens, the bobbin rises. Almost anything that is of the right general size and weight can be used, and many small plastic bottle tops have done sterling service in the role, though some of the very latest shop-bought designs take the whole thing to new heights with LED lights to make them easier to see in the dark. Increasingly, bobbins are being partnered with electronic alarms to give an audible extra warning also – and when it comes to the serious business of catching fish, there’s nothing wrong with that sort of belt and braces approach!

Swing-tips and quiver-tips are another popular approach. Swing-tips consist of a hinged stiff extension, threaded on to a matching base piece, that is attached to the tip ring of the rod. The bait is cast in the usual way and then reeled in to produce a slight angle in the swing-tip itself; the tip will “swing” on its hinge as a fish takes the bait. Principally used in still, or very slow, water since the action of the tip obviously requires fairly calm conditions to work properly, but in the right place, they can prove a very effective way of knowing what’s going on.

Quiver-tips work in a different way. These extension pieces also attach to the tip of the rod but there is no hinge in their construction, their bite indication relying instead on the movement of the thin tip itself to act as the signal. Their tapering shape magnifies and accentuates the slightest movement that is communicated to it along the line – and consequently, it’s important to pick one with an appropriate test curve rating for the type of fish you’re after. Fortunately, a large range is available, so whether you’re fishing for monsters or minnows, there’ll be one to suit.

Bite indicators of one form or another have probably been sitting in tackle boxes since people first learnt to fish – or pretty soon afterwards, at any rate – and with today’s range of innovative designs, new “takes” on old ideas and high-tech gadgets and gizmos, there’s never been more choice. The good news is that picking the right one for your style of fishing, type of water and chosen quarry has never been easier; the bad news, however, is that there’s getting to be fewer and fewer excuses for the one-that-got-away!