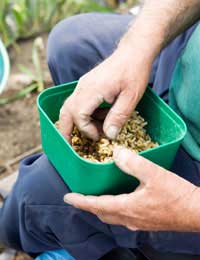 Although there are times when some kinds of fish will bite when they are not actively engaged in seeking food, for the most part, it is their feeding activities that drive the whole fishing experience.

Many an angler has reasoned that knowing when fish are going to be ready to feed – and what on – holds a big part of the key to successful fishing, but unfortunately, despite the undoubted good sense of the idea, turning it into reality is not a straightforward matter. There are many individual factors that influence feeding, and they often interact, making accurate predictions impossible, but while we may never have a definitive answer, there is, never-the-less a lot to be gained from trying to improve our understanding of fish feeding.

Temperature is a major factor in feeding behaviour, particularly in fresh water species – so it’s hardly surprising that there are specialist angling thermometers available to help you work out what’s going on. Once the weather turns cold and winter is beginning to creep in, activity slows down for most of the fish in British rivers and lakes, and once the mercury drops to around 4 degrees C, almost all of them pretty much stop feeding altogether. A sudden and unexpected cold snap is particularly problematic for the angler, since the fish don’t really have time to get accustomed to the change, but in a normal winter, the gradual drop allows them to acclimatise to some extent, which means that they will eat sporadically, but nowhere near as often as they did when it was warmer. Below 2 degrees, however, and there’s seldom much point in leaving your own fireside!

When the fish are biting, but very intermittently, ground-bait and flavours are not the answer, but you can often improve your chances by:

Even when temperature conditions are favourable, the time of day can play an important part in whether fish will feed or not. Of course much of this is obvious – particularly with night feeding species such as eels – but other aspects are often less well appreciated and there can be marked differences of behaviour over the course of 24 hours. Studies of perch in the wild, for instance, have shown that during the summer months, feeding typically begins slowly at sunrise, and peaks at around noon, while at the other end of the day, the fish are least likely to go in search of food between 7 pm and 3am the following morning.

There can also be significant seasonal variation, both in terms of when fish feed, but just as importantly, on what. Even species that have well defined natural diets will take unexpected items at times – particularly if there is a new and abundant supply in the area – so anglers need to stay vigilant and responsive to any changes if good fishing is going to be had.

Every sea angler knows how tides and the weather can affect fishing, and with a little awareness of how wind and waves influence the way fish feed, you can slant the odds in your favour when it comes to catching them. Sea fish are master opportunists, and add bottom-churning storms to a good spring tide and the conditions are set for a bonanza of unexpected – and previously inaccessible – food to be on offer. The day after one of these events and all manner of possible food items will be exposed to any marauding fish that comes along and this can often temp some very large and interesting specimens to see what’s available. If you’ve done your homework properly, you’ll know where to cast, and then with luck it’s just a case of waiting to let fishy hunger take its course!

Whatever type of fishing you favour, knowing a little about the factors that influence feeding, can only help. It’s a complex issue, but it’s well worth making the effort to get to grips with the way the fish in your patch behave, and don’t forget to keep records. The more you can recognise the patterns in feeding behaviour year by year, the more fish you’ll catch, in the long run.